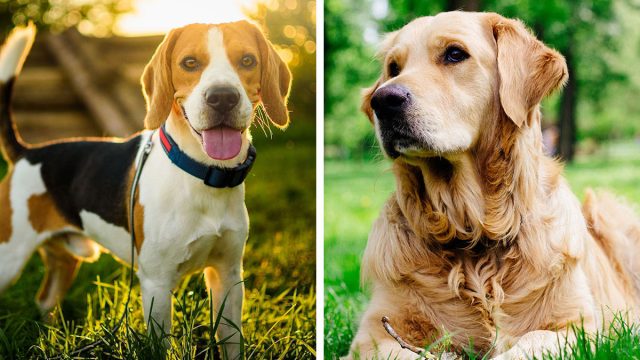 The choice between a beagle vs. a golden retriever is challenging because both dogs are even-tempered, beautiful, and popular.

The similarities between beagles and golden retrievers exceed differences, especially in terms of personality.

Beagles and golden retrievers are hunting breeds, so they share the traits that make a perfect hunting companion, such as obedience, intelligence, and loyalty.

The most significant differences between beagles and golden retrievers lie in their size, barking levels, grooming needs, and health.

There’s no dog breed better or worse. The best dog is one that fits your personality and lifestyle, so the choice is only yours to make.

Beagles are significantly smaller, ranging from 11 to 15 inches in height and weighing 19 to 24 pounds in adult age. There are two beagle varieties, shorter and taller. Note that a dog’s weight depends on exercise, age, and health condition.

Golden retrievers have a lustrous, beautiful coat that sheds a lot. These dogs have a dense, fluffy undercoat and a long overcoat.

They shed year-round, but shedding becomes extra intense in spring and fall, so golden retriever owners quickly get used to finding fur around the house and never going out without using a lint roller first.

Beagles are moderate shedders. They also have heavy shedding phases in spring and autumn, when they change all their coat in a matter of weeks.

Still, beagles are much better for people allergic to dog fur or who do not have time for frequent cleaning.

Golden retrievers are friendly, affectionate, and obedient dogs. They are eager to please the owner, never aggressive, and very energetic. Adult goldens often behave like puppies, a bit goofy yet adorable.

Beagles, too, are friendly dogs that like affection and prefer to be in company. However, they tend to be less obedient than goldens and, at times, stubborn. This breed is very curious and has a high prey drive.

Golden retrievers are excellent dogs for families with children. Because they aren’t aggressive, love cuddles, and have a soft bite, they make perfect companions for children of all ages, particularly for older kids who can play with the dog.

Beagles are equally good for kids because of their affectionate, loving nature and relatively small size. A beagle won’t knock over a child or hurt it during play. Still, supervision is always necessary when a child interacts with a dog.

Golden retrievers are a popular choice among families with cats or other dogs. They can even get along with rabbits and other small pets because they have a low prey drive and won’t try to chase or bite another animal.

Although beagles are natural-born hunters, they get along with cats and other small pets surprisingly well. A beagle will appreciate a companion to play and cuddle with. However, remember that friendship goes both ways.

One of the best things about golden retrievers is that they don’t bark for no reason. These dogs were bred to retrieve waterfowl, and if they were constantly barking, they would make awful hunting companions.

In contrast, beagles are notorious for frequent barking, sometimes excessive. They are also prone to other vocalizations such as howling. That’s something to keep in mind if you prefer quietness or have small children.

Golden retrievers are ranked the fourth most intelligent dog breed by canine behavior specialists and American Kennel Club. They are obedient, empathetic, communicative, and have excellent memory.

Beagles are 13th on the smartest dog list, which is also an excellent result. Their independence may sometimes hinder training, but overall, beagles are wonderful, intelligent, empathetic dogs that can in no way be called dumb.

No dog is perfect, and every breed is prone to particular behavior problems that can be triggered by a lack of socialization, training, or exercise. Golden retrievers may suffer from separation anxiety or phobias, chew on things, dig, and be hyperactive.

The most common problem with beagles is excessive vocalization. These dogs may also chew on things, dig, be hyperactive, and ignore commands. Both breeds may pull on the leash and jump on people from excitement.

All hunting dog breeds need plenty of physical activity and mental stimulation. Golden retrievers and beagles aren’t suitable for people who aren’t willing to invest time into walking with their dogs.

The golden retriever coat requires a lot of upkeep to maintain its beauty and health. Owners must brush their golden retrievers daily and bathe them when necessary, usually at least once in four weeks.

Golden retrievers don’t need haircuts and must never be shaved but will benefit from feather trimming. Beagles also need regular baths and claw trimming but don’t need as frequent brushing.

Golden retriever life expectancy doesn’t exceed 12 years, while beagles live for 12-15 years on average. Losing a friend is always painful, but owners can extend their pet’s lifespan by providing it with the best possible care.

Beagles are also prone to obesity, ear infections because of their ear anatomy, cherry eye, and hypothyroidism. Additionally, they are susceptible to allergies and epilepsy but are at a lower risk of developing cancer.

The average price of a golden retriever puppy is $1,000-$3,000, with top-quality puppies priced at $4,000 and upwards. However, some puppies are sold for under $800, and rescue golden retrievers typically cost under $500.

Golden retrievers are a good choice for first-time dog owners, provided the owners are ready to invest time and effort into grooming, training, and exercising the dog. An under-stimulated golden retriever can be disastrous.

Beagles are even better dogs for inexperienced owners because of their relatively small size and even-tempered personality. Like golden retrievers, they are demanding to exercise and training but are easier to handle and groom.

Golden retrievers aren’t on the list of the best apartment dogs. They can live in a large apartment located close to a park where they can run freely, but not in a small condo in the city center.

A golden retriever that isn’t getting enough exercise may behave destructively, causing inconvenience to neighbors, and become obese.

One would think that beagles make great apartment dogs because of their small size, but it isn’t that simple. Beagles have high prey drive and energy levels and bark a lot. Consequently, beagles can be even more inconvenient for neighbors.

However, beagles can live in apartments if their owners spend enough time walking with the dog and train it not to bark unless necessary.

Golden retrievers are among the best service dog breeds because of their trainability, friendliness, intelligence, and affection. They are rarely aggressively in public places and are unlikely to harm strangers.

Furthermore, golden retrievers are large enough to perform tasks small dogs cannot, such as pushing elevator buttons or unloading groceries. They can also support the owner who can’t stand still.

Beagles, too, are commonly used as working and service dogs because of their intelligence and wonderful temperament. However, their task-performing capacity is limited because of their size.

Beagles cannot push a wheelchair, carry heavy bags, or assist the owner when they feel drowsy, but they make perfect emotional support animals and can perform non-physical service dog tasks.

Suitability as Guard or Protection Dogs

Golden retrievers are loyal dogs who will never let anyone hurt their owner. They are large, confident, and have scary barks. But here’s the pitfall – goldens are way too naïve and friendly, often missing signs of danger in strangers.

Beagles are instinctively protective of their owners and make great watchdogs for children, but they aren’t natural-born guard dogs because of their size.

Golden retrievers and beagles are born to be hunting companions! They have everything it takes to become a perfect hunting dog – intelligence, obedience, athleticism, and loyalty.

Golden retrievers are typically used to retrieve waterfowl, whereas beagles have been historically used to find prey and alert hunters.

Beagles are ranked the sixth most popular breed, so finding a puppy isn’t a problem. Red and tan beagles are the rarest variety.