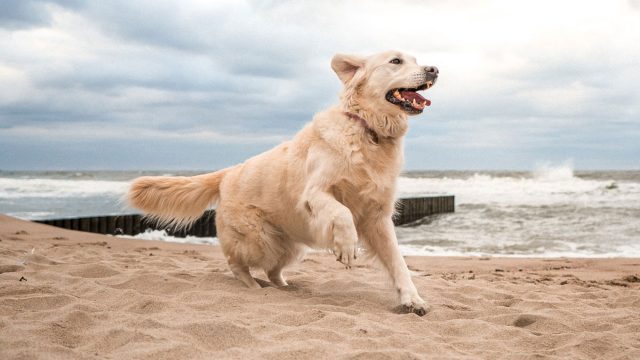 Anyone considering becoming a golden’s owner should be familiar with golden retriever characteristics.

Knowing golden retriever physical traits is necessary to determine an individual dog’s compliance with the breed standard, understand its needs, and provide it with adequate care.

Some golden retrievers’ physical characteristics affect only their appearance, while others are closely tied with their temperament and may influence their compatibility with the owner.

Golden retrievers are a medium to large dog breed intended for hunting. They are natural athletes with a developed muscular structure, high energy levels, and stamina.

Like any large hunting dog, golden retrievers require plenty of attention to maintain their beauty and health.

The relatively large size of golden retrievers makes them perfect service dogs that can perform commands smaller dogs can’t, such as switching off lights, pushing elevator buttons, and taking items from the table.

Overall, a golden retriever should have a muscular body with a broad, strong back and wide chest. The croup should slope slightly. Too narrow chest or sloping topline are considered serious faults by the breed standard.

Unfortunately, golden retrievers love to eat and are prone to obesity, so owners should prioritize their pet’s diet and provide it with sufficient exercise.

Golden retrievers should have a slightly arched broad skull without a prominent forehead. The transitioning from the forehead to the nose, also known as the stop, should be well-defined but not abrupt.

British golden retrievers typically have a broader head than American or Canadian. The dog’s teeth should be properly aligned without visible underbite, overbite, or deformities.

According to the golden retriever breed standard, the ears should be drop and short, with front edges attached just above the eyes. The ear’s tip should cover the eye when pulled forward, and the ear should be pliable.

The fur on the ears is shorter than on the rest of the body and slightly longer at the base than at the tips. However, some goldens have fluffy, relatively long fur covering the entire ear.

Golden retrievers keep their ears drawn back half-folded into the neck ruff when they rest but may draw them up when alert.

Low-set, hound-like ears are considered a fault in golden retrievers and can lead to disqualification from a show. Although golden retrievers were bred for hunting in the water, their ears are susceptible to otitis if water gets trapped inside.

Golden retrievers have a dark brown or black nose, regardless of the coat color. The nose texture is crinkled, resembling grainy leather. The nostrils are large and open.

Sometimes, a golden retriever’s nose may lose pigment and become pink. This phenomenon is known as “snow nose” because it usually occurs in winter. Snow nose isn’t considered a fault and won’t disqualify a golden retriever from participating in a show.

In the summertime, a dog’s body produces more melatonin to protect the skin from the harmful effects of sun rays. But when winter arrives, and the sun no longer threatens the dog’s skin, it may stop producing melatonin entirely, causing the nose to become pink.

However, a very pale nose without pigment may be caused by vitiligo or autoimmune diseases and is considered a fault. The nose shouldn’t be perfectly smooth.

Golden retrievers have medium-sized eyes set well apart but not too deep in the skull. The eye color is medium to dark brown, with close-fitting rims. Golden retrievers typically have an intelligent, friendly eye expression.

On the other hand, Kennel Club U.K. states that golden retrievers can be of any shade from cream to dark gold but never red or mahogany. The Canadian golden retriever breed standard recognizes colors from light gold to darkest gold.

Medium gold is the most popular golden retriever color, accounting for about 50% of all retrievers globally. The cream is the second-most popular color, and red is the rarest.

Golden retriever coat color changes as the dog ages. Puppies always are lighter than adult dogs, and one can find out the puppy’s future coat color by looking at its ear tips.

Golden retrievers have a double coat. The dense, thick, water-repellent undercoat regulates golden retriever body temperature and keeps it dry when swimming. Meanwhile, the topcoat is moderately long, lies close to the body, and can be straight or wavy.

Golden retrievers with untrimmed fur have a natural ruff around the neck and feathering at the back of the legs and on the chest.

In contrast, the coat on the head, ears, and front of the legs is shorter than on the rest of the body.

A golden retriever’s coat shouldn’t be shaved and doesn’t require special grooming cuts. However, it can be trimmed around the feet. An excessively long, soft, or open coat is considered a fault.

Golden retrievers shed year-round, but the shedding becomes more intense in spring and fall when the climate changes. For this reason, goldens require regular bathing and grooming.

A golden retriever’s tail is an extension of the spine. It should be thick, muscular at the base, and tapered at the tip. The correct golden retriever tail length extends to the hock but shouldn’t fall lower.

When golden retrievers are relaxed, their tail hangs down. A wagging tail indicates emotional arousal, be it excitement, frustration, or anger. A golden retriever keeping its tail up is likely alert or trying to seem intimidating.

In contrast, a tail hanging low indicates fear and submissiveness. Overall, a golden retriever’s tail language is no different from the tail language of any other dog.

Golden retrievers are the cuddliest dogs, which makes many people forget that they were bred for hunting. Although goldens are far from the strongest dog breed, they aren’t teddy bears either.

Golden retrievers historically had to run and swim a lot and have developed a strong muscular system. They have muscular shoulders and sturdy legs.

Golden retrievers are extremely agile despite their large size and have immensely high stamina, enabling them to run miles non-stop.

Such a high energy level makes golden retrievers one of the worst dogs for retirees but perfect for people loving to spend time outdoors, athletes, and families with kids.

Not many know, but golden retrievers have one of the strongest bites among all dog breeds. However, they are also known to have soft mouths, allowing them to carry items in their mouth without damaging them.

Golden retrievers are natural-born swimmers. Apart from a water-repellent coat and muscular legs, they have webbed feet, similar to ducks or frogs, but only partially. Golden retriever webbed feet enable them to swim faster and spend less energy.

This unusual trait also helps golden retrievers to move faster on land terrains because they are less likely to sink in mud or slip.

Thanks to webbed feet, golden retrievers dig dirt faster, which can be a nightmare for owners proud of their garden.

Interestingly, swimming is among the best activities for golden retrievers, and a 10-minute swim is equivalent to an hour of walking.