Why is My Golden Retriever’s Nose Turning Pink? 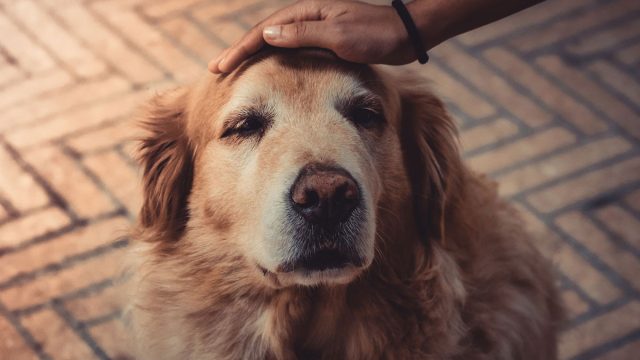 A golden retriever’s nose turning pink can be a worrying sign because the breed standard explicitly states that it should be black.

Sometimes, a pink nose in golden retrievers is a genetic mutation – it’s wrong from the standard standpoint but not dangerous.

However, if a dog’s nose has turned pink suddenly, the owner should pay attention to any other abnormalities in its appearance and behavior.

Often, a pink nose is nothing to worry about, but the owners shouldn’t neglect it to avoid missing signs of a severe health condition.

If your golden retriever’s nose becomes pink during colder months, it may have a “snow nose” or “winter nose.” Scientifically, the condition is called hypopigmentation. Veterinarians don’t know for sure what causes the disease.

Since it’s common in wintertime, the issue may lie in cold temperatures or specific enzymes. But while golden retrievers usually get a “snow nose” in winter, the condition may also occur in summer.

The most probable theory is that hypopigmentation is caused by the enzyme tyrosinase, responsible for melatonin production. Melatonin protects a dog’s skin against the harmful effects of sun rays.

Melatonin production typically increases in the summertime, and when sun rays no longer threaten a dog’s health, its body may stop producing tyrosinase entirely.

The good news is that hypopigmentation isn’t harmful to a dog’s health – it’s the primary reason the condition is so little researched.

There’s nothing to worry about if your golden retriever doesn’t show any other behavioral or physical abnormalities.

Many owners wonder whether a dog’s nose will turn black again. “Snow nose” is a solely cosmetic issue and typically isn’t permanent.

The dog’s nose will eventually return to its initial color. However, in rare cases, the nose may remain a lighter shade.

An important note is that hypopigmentation doesn’t change the dog’s nose texture or moisture. If a golden retriever’s nose becomes smooth or otherwise feels different, it likely isn’t “snow nose.”

Since veterinarians don’t know what causes the color change, there’s no treatment or prevention for the condition.

Note that the symptoms don’t always occur simultaneously. Bring your dog to a vet if you notice any abnormalities in its breathing, nose texture, or appetite.

In other words, rhinitis is often a symptom of more severe health conditions, so the veterinarian will look for signs of ulcers, tooth root abscesses, and foreign objects and conduct blood tests.

Nose inflammation treatment in dogs depends on the cause. If rhinitis is caused by a bacterial or fungal infection, a veterinarian will prescribe the dog antibiotics.

Chronic inflammation isn’t always curable but can be eased on an ongoing basis. A dehumidifier can help ease the dog’s breathing, loosening up mucus that blocks its airways.

A golden retriever’s nose may turn pink due to trauma. Think of how your skin turns pinkish-red when you scrape it against abrasive objects – the same can happen with a dog’s nose.

If your golden retriever’s nose color has changed due to trauma, you will notice a scratch, raw patch, or other signs of damage. In severe cases, trauma may cause a nosebleed.

When the nose skin’s upper layer is scraped off, the pink underlayer gets exposed, so your dog’s nose may remain pink while it heals.

If the trauma is severe, see a vet as soon as possible to prevent infection. To stop the nosebleed, apply pressure to the wound with a clean cloth.

However, if it’s just a small scratch, you can treat it at home by applying topical over-the-counter medications.

Like humans, dogs can have environmental and food allergies. The allergen can be any – pollen, dust, chemicals, new dry food, or dander.

One unusual yet common dog allergen is plastic – the reaction can be triggered by plastic food bowls or toys.

The change in a dog’s nose color in the case of allergy is caused by inflammation. Unfortunately, diagnosing an allergy at home is nearly impossible because the symptoms are numerous and often resemble other conditions.

Pay attention to your dog’s ears, paws, nose, and neck – these areas are the most affected by allergic reactions.

A veterinarian will first rule out any other conditions that may cause the symptoms before diagnosing your dog with an allergy. Environmental allergies can be diagnosed with lab tests.

Allergies in dogs can’t be treated, but they can be managed by reducing exposure to the allergen and administering antihistamines or steroid injections.

A less common but not less worrying than a trauma or allergy cause of pink nose in golden retrievers is discoid lupus erythematosus or shortly lupus.

Lupus is an autoimmune disease, meaning that it’s caused by changes in the dog’s immune system triggered by infections or specific gene mutations.

The former lupus type has a higher lethality rate, but the latter type also requires urgent treatment because it can lead to skin cancer.

Diagnosing lupus is challenging because the condition is rare, and veterinarians usually try to rule out other potential causes first.

Apart from a pink nose, the symptoms of systemic lupus in dogs include anemia, fever, weight loss, muscle stiffness, lameness, joint swelling, ulcers around the mouth, seizures, and hair loss. As you can see, the symptoms aren’t particularly unique.

Skin lupus in dogs causes depigmentation around the nose and mouth, erosions, ulcers, and smooth nose texture. Since lupus is an autoimmune condition, its treatment requires immune system suppression.

Canine lupus can occur at any age and in any breed, but young to middle-aged golden retrievers, Irish setters, beagles, Afghan hounds, and German shepherds are at a higher risk. Lupus is uncurable but treatable.

Another rare cause of pink noses in dogs is vitiligo, a condition also found in humans. Vitiligo affects the skin, causing depigmentation. The skin loses its natural color and becomes pale pink or almost white.

Vitiligo also affects the hair, so a dog’s coat can have white patches. The good news is that depigmentation isn’t dangerous. It may make your golden retriever look funny but never ends lethally and doesn’t affect other bodily systems.

The causes of vitiligo in dogs are uncertain, but most veterinarians agree the condition is hereditary. It affects Rottweilers, Siberian huskies, Labrador retrievers, golden retrievers, and German shepherds more often than other breeds.

However, in rare cases, vitiligo may be caused by autoimmune diseases that cause the immune system to destroy melanocytes, cells responsible for melatonin production.

Other potential causes of vitiligo include toxin exposure and neurologic conditions.

So, even if your dog shows no other symptoms and you suspect it has vitiligo, a vet visit is still worthwhile. Vitiligo can’t be cured and doesn’t need treatment unless it’s a symptom of a different health condition.

Lupus isn’t the only autoimmune disease that causes a pink nose in dogs. Pemphigus is a rare skin condition causing antibodies to attack skin cells, leading to blisters, ulcers, erosions, crusting, and abscesses.

In the early stages, pemphigus may resemble a snow nose or vitiligo because it first affects the nose and ears. Over time, a dog begins to feel intense pain and may become lethargic. Pemphigus diagnosis requires a skin biopsy.

The treatment involves immune system suppression with corticosteroids or other immunosuppressive drugs. The therapy is life-long because the condition can’t be cured. Without treatment, the disease can be fatal.

Fortunately, golden retrievers aren’t among the breeds predisposed to pemphigus. But if your golden is a mix with a German shepherd, Border Collie, or Newfoundland, it’s at a higher risk.

When To See a Vet

If you notice your golden retriever’s nose turning pink, bring it to a vet regardless of the presence or lack of other symptoms because skin discoloration may indicate severe health issues.

The prognosis of some conditions depends on the timeliness of treatment, so don’t postpone the vet visit.

If the vet says your dog has a snow nose or vitiligo, you can sleep peacefully. And if your dog has an infection or autoimmune disease, you can start treatment early to have a higher chance of a positive outcome.