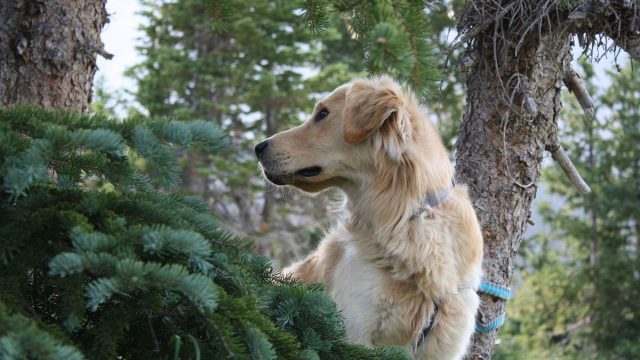 Golden retrievers are the third most popular dog breed in the U.S., so it’s no wonder many people are interested in golden retriever origin.

Despite such popularity, the breed is relatively young, stemming from the late 1800s.

Golden retrievers were intended for the sole purpose of retrieving fowl and lost objects from the water but have since proven to be excellent service and family dogs.

Modern-day golden retrievers result from the efforts of one Scottish family and enthusiasts worldwide who dedicated their lives to improving the breed.

The Country Of Origin

Nowadays, golden retrievers come in three types – American, Canadian, and English. However, they originated in none of these countries, though “English” is the closest to the truth.

Golden retrievers’ country of origin is Scotland. More specifically, the first golden retriever was bred in a Scottish estate Guisachan near Glen Affric, the southwest region of the Scottish Highlands, some 20 miles away from the famous lake Loch Ness.

Many golden retrievers’ ancestors also originated in the British Isles.

The Tweed Water Spaniel, nowadays extinct, originated near the river Tweed close to the Scottish border. Flat-coated retrievers were bred in Wales and Irish setters in Ireland.

The Man Behind The Breed

Like most dog breeds, golden retrievers owe their existence to one visionary person. The man behind the golden retriever breed was Dudley Coutts Marjoribanks or Laird of Guisachan and Glenaffric, the first Baron Tweedmouth.

Sir Marjoribanks was born in 1820 and dedicated his life to business and politics. He inherited a substantial fortune from his parents and put part of the money towards a mansion in the Scottish Highlands where the first golden retrievers were bred.

Baron Tweedmouth was passionate about hunting and sporting dogs, so he built large kennels on his estate territory and regularly hosted shooting parties.

But the place has preserved its history, and in 2013, the Golden Retriever Club of Scotland welcomed hundreds of golden retrievers from 15 countries at a gathering on the Guisachan grounds.

Baron Tweedmouth used to record all his dog breeding experiments in a leather diary that was preserved by the British Kennel Club. From his diary, we can find out the golden retriever’s ancestry.

Golden retriever history begins when Baron Tweedmouth purchased a flat-coated retriever named Nous. In 1865, Sir Dudley Marjoribanks was walking with his son in Brighton and came across a cobbler who owned Nous.

The cobbler got the dog as a debt payoff from an employee of a nobleman. At that time, only black dogs were used for hunting, and others were considered faulty.

Nous’ parents were black, but he was born with a golden coat, so the nobleman saw no sense in keeping him. Had Nous not been given to the cobbler, he would be likely simply disposed of, and we would never see golden retrievers.

We don’t know why Baron Tweedmouth decided to buy Nous off the cobbler. Maybe he liked the unique coat color or thought the cobbler wouldn’t be able to give the dog a decent life.

Either way, he brought Nous to his estate, where the dog lived peacefully, occasionally accompanying the new owner to hunting.

According to historical data, these dogs were brown and athletic, resembling Irish Water Spaniels but with a heavier muzzle. They were slightly smaller than golden retrievers.

St. John’s water dogs are depicted as very similar to black Labrador retrievers but with white markings on the feet and nose.

Sir Marjoribanks kept Primrose and Cowslip, gave Crocus to his son Edward, and Ada to his nephew, the Earl of Ilchester.

Baron Tweedmouth continued to breed yellow retrievers in his estate in Guisachan, and the Earl of Ilchester produced a new breed bloodline.

In the 1890s, Baron Tweedmouth crossed a yellow retriever with a sandy-colored bloodhound, but the puppies didn’t acquire the visual characteristics of bloodhounds.

In an article printed in the Country Life Magazine in 1952, the son of Earl of Ilchester, Giles Fox-Strangways, remembers Ada as a charming-tempered dog who was fearless and curious.

Unfortunately, no clear record was kept regarding the further crossing of yellow retrievers with other breeds. At first, they were crossed with black Labrador retrievers and deerhounds.

Sir Marjoribanks’s son Edward owned an Irish setter, which could explain the deep red undertone in some English golden retriever coats and the distinct mahogany color of field golden retrievers.

In short, from Ada, Crocus, and Cowslip, Sir Marjoribanks, his son Edward, and his nephew, Earl of Ilchester, started breeding two distinctly different yellow retriever types. We don’t know whether Primrose ever produced a litter.

Marjoribanks’s youngest son Archie brought the first yellow retriever Sol to Texas in the 1890s. From there, he moved to Canada when his brother-in-law, Canadian Governor-General Lord Aberdeen, appointed him his aide-de-camp.

Although yellow retrievers have been bred since the 1800s, they were first exhibited to the public in 1908. Since golden retrievers originated from flat-coated retrievers, they were considered a color variety of the latter.

In 1904, a golden retriever won a competitive event for gundogs, but the British Kennel Club recorded the victory as belonging to a flat-coated retriever.

In 1911, a group of enthusiasts formed a “Yellow or Golden Retriever Club” to distinguish their dogs from flat-coated retrievers. Yellow retrievers were recognized as a distinct breed by the British Kennel Club in 1913.

The golden retriever breed standard still used today was developed by Winifred Charlesworth in the early 20th century. The standard remained unchanged, apart from minor amendments made by the American and Canadian Kennel Clubs.

Thanks to Winifred Charlesworth’s efforts and fortunate timing, golden retrievers didn’t become extinct like many British dog breeds during World War ll due to their surging popularity.

A popular golden retriever myth is related to the breed’s origin. Some people believe that golden retrievers descended from Russian circus dogs known as Russian Trackers. Although implausible, the theory has a ground.

From Sir Marjoribanks’s journal, we can find out that he indeed purchased three dogs from a dog trainer in a traveling circus. According to historical records, the dogs were brought from the Caucasus.

Baron Tweedmouth’s grandnephew, Giles Fox-Strangways, in the Country Life Magazine in 1952, admits that he never had faith in this theory.

However, one of the dogs, Sancho, indeed was yellow and could have inspired Sir Marjoribanks for his experiment with Nous.

But Baron Tweedmouth never mentioned Sancho’s ancestry or his attempts to breed Sancho in his journal, only that he bought him from a circus. So, we can conclude that the ancestor of the first golden retrievers was Nous.

Interestingly, Winifred Charlesworth was a formidable advocate of the Russian theory of golden retriever origin.

In 1939, an article in English dog magazine The Field debunked the myth, stating that Baron Tweedmouth’s grandson had earlier said that his grandfather never bred Sancho.