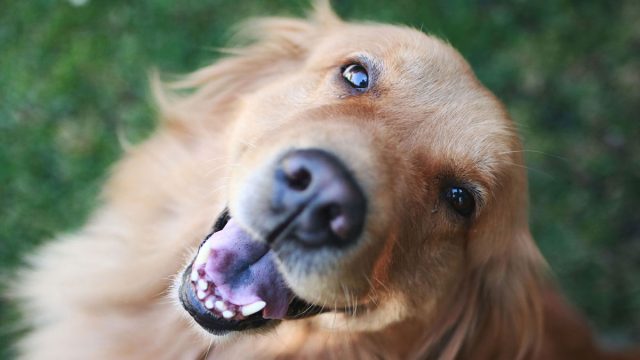 The best dog is one that suits your personality and doesn’t require more attention than you can provide.

Golden retrievers often top the list of the best dog breeds, but no breed suits everyone. Prospective owners should know the core golden retriever traits and evaluate their compatibility.

Goldens are intelligent, friendly, and obedient dogs. They love to play and seem to get along with everyone – but they aren’t perfect.

A dog is a responsibility, but a golden retriever may become your perfect companion if you’re ready to invest the effort and time.

If you get a golden retriever puppy, have it screened for heart diseases and hip dysplasia. The breed is also prone to obesity and skin conditions, so correct diet and grooming are vital.

Golden retrievers shed a lot, that’s common knowledge among dog enthusiasts, and there’s nothing one can do to stop them from shedding. But while golden retrievers need regular grooming, the process is pretty straightforward.

Every dog breed needs grooming. Golden retrievers need to be bathed about every six weeks and brushed about once a week to detangle the hair unless they jump into a mud puddle.

If the owner neglects these two basic rules, a golden retriever may have a distinct doggy odor and knotted hair.

Owners can limit home grooming to weekly brushing if they opt for a professional grooming cut. A pro can bathe the dog, trim and feather the coat to keep shedding at bay and trim the claws, easing the task for owners.

Golden retrievers are known as one of the easiest dog breeds to train. These dogs were bred to be obedient and intelligent. They learn commands quickly and go over and beyond to please their owner.

Like many dog breeds, golden retrievers owe their existence to one visionary person who bred them for a particular task.

In the late 19th century, Sir Dudley Marjoribanks developed golden retrievers by crossing tweed water spaniel, red setter, and flat-coated retriever in his mansion in Scotland. The result was a beautiful and obedient hunting dog.

Golden retrievers are always in the top five of the most trainable dog breeds. Researchers ranked them the fourth smartest dog breed, and intelligence is directly linked with trainability.

Golden retrievers are also highly food-motivated, so the best way to train a golden is to reward it with a treat.

Many people refrain from having a dog because they think that dogs bark a lot. This is true for some breeds, like beagles, wire fox terriers, and poodles. Living with a barky dog can be stressful for people valuing serenity and young parents.

However, golden retrievers don’t bark a lot. They do bark, like any dog breed – to expect a dog not to bark is like to expect a person to never talk although they have a voice. Still, goldens only bark occasionally.

So, the owners don’t have to worry about a golden retriever waking them up at night or making a child cry with loud barking. Even when golden retrievers serve as watchdogs, they don’t bark until they sense real danger.

When the barking is excessive, owners may begin to perceive it as a norm. But golden retrievers only bark for a reason.

It could be excitement, distress, or aggression, but the owner can instantly indicate something isn’t right if their golden barks.

There’s no need to teach a golden retriever to swim like an English bulldog or a bull terrier. Goldens have a double coat that makes them practically water-resistant and long, muscular legs.

Their body was built to float on the water, and many golden retriever puppies are born knowing swimming movements.

There are exceptions, of course. Some goldens may need the owner’s help to learn to swim properly. Still, they have all the traits necessary to become great swimmers.

The love for water is beneficial because goldens need regular bathing. A golden retriever is unlikely to run away when it hears running water, unlike pugs or boxers who aren’t fond of water.

Goldens will never leave a human to drown, especially if it’s their favorite human. However, it doesn’t mean that the owners can just leave a golden with their child in a pool without supervision.

Golden retrievers are among the most affectionate dog breeds, which may be both a pro and a con. They love to cuddle, lick hands, put paws on the owner, and sleep in the bed.

A golden retriever will always try to sit close to its human. Of course, cuddling is cute – it’s a dog’s way of expressing its love to the owner.

Such affection also supports the owner’s mental state and can even help fight anxiety and depression. For this reason, golden retrievers make the best therapy dogs.

However, this personality trait can become a problem if the owner isn’t ready to provide the same level of affection. Golden retrievers don’t like to stay alone and can suffer from separation anxiety.

The owners may also have difficulty to explain a golden retriever that it isn’t welcome on the bed or couch, especially if they saw no problem with such behavior when it was a puppy.

7. Get Along With Other Pets

Everyone knows that cats and dogs don’t get along – but this isn’t a universal rule. Since golden retrievers are friendly, obedient, and intelligent, they get along well with most pets, including cats, rabbits, and other dogs.

Of course, this also depends on the personality of another pet and how well trained a golden retriever is. If a cat or another dog is jealous of the owner’s attention or aggressive towards the golden retriever, they won’t become friends.

Still, a golden retriever is unlikely to be nasty towards another pet for no reason. According to dog breeders, German shepherds, pugs, basset hounds, and Goldendoodles get along with golden retrievers especially well.

When one becomes a parent, their focus shifts towards the child entirely, and the child’s safety becomes the top priority.

Unfortunately, not all dog breeds are friendly to children, and some are straight-up dangerous to keep with a kid.

The good news is that the golden retriever isn’t one of them, and the reason isn’t solely great trainability and intelligence.

Goldens are gentle giants who genuinely love children. They don’t mind cuddling and are always up to a play.

Not only are golden retrievers good with children, but they are good for children, teaching them to be responsible and providing moral support.

However, young parents shouldn’t leave a child with a large dog like a golden retriever without supervision regardless.

Like any animal, a dog is guided primarily by instincts. Children don’t always understand when playing and cuddling is too much, which may cause aggression.

Teaching a child to be kind to dogs is essential to build a strong bond between them and avoid conflicts.

Golden retrievers are active dogs, whether one likes it or not, so the owner should be prepared to provide their pet with enough exercise. It isn’t a breed for calm people who prefer to spend time at home.

Like all hunting dogs, golden retrievers are a sporting breed with high stamina, capable of running miles non-stop.

If a golden retriever doesn’t get enough exercise and isn’t trained, it may become a chewing, digging, and running destruction machine.

An adult golden retriever needs about an hour of exercise a day, although some are more energetic and may need about two hours daily.

You can train any dog, but not every dog makes a good companion for impaired people. Golden retrievers are among the best service dog breeds because they aren’t solely obedient but also intelligent, devoted, and caring.

A service dog must be friendly to strangers because it should accompany the owner in public places, and friendliness makes golden retrievers perfect candidates for the role.

A service golden retriever won’t bark at a smaller dog or run after a cat passing by.

Furthermore, due to their relatively large size, golden retrievers can perform tasks smaller dogs wouldn’t be able to do due to physical limitations.

For example, opening doors, pushing elevator buttons, and supporting the owner when they can’t stand properly.

Welcome to Dogoka. I’ve always loved spending time with my family dog. As I learn about humans’ best friends, I share my discoveries and observations on this site, as a dog lover.
Topics
Recent Articles
»