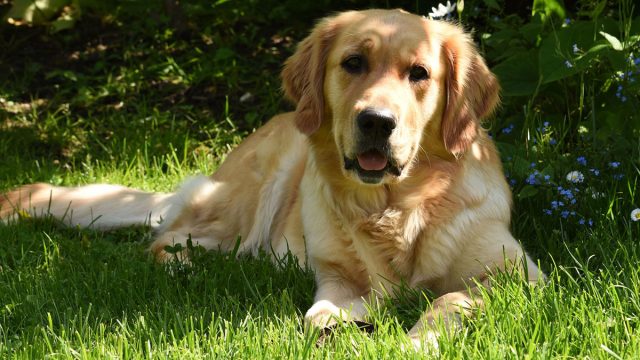 Before buying a puppy, learn about the most common golden retriever traits to ensure you’re a good match.

The temperament of a golden retriever is friendly, outgoing, affectionate, and loving, but they demand the same from their owners.

Of course, a dog’s temperament depends on many factors, including its individual peculiarities, parents, training, and socializing.

Still, some personality traits are so deeply rooted in golden retrievers’ genes that they can’t be combatted.

Golden retrievers are perfect dogs for extraverts, families with kids, athletes, and adventurous people ready to invest time and effort to receive unconditional love in return.

Golden retrievers are one of the best dog breeds for kids because they are gentle and loving.

Although goldens can behave crazy when they’re running outdoors, they seemingly have an inherited sense of boundaries with children and will never harm them.

A golden retriever won’t run towards a child at full speed and tip them over. These dogs won’t scratch a child during play or become aggressive when they’ve had enough of cuddling.

Golden retrievers don’t know aggression. If you’ve ever met an aggressive golden retriever, it has likely been abused or lacked socialization. Still, most goldens will never even hurt a fly, let alone a child.

Apart from a gentle personality, golden retrievers have soft mouths that enable them to carry objects without damaging them. Consequently, they won’t bite a child hard during play.

Note that although golden retrievers are gentle, they are still dogs and may not always adequately evaluate their strength. Don’t leave a baby with a large dog without supervision, regardless of the breed.

2. Friendly With Other Pets

Golden retrievers get along with everyone, including other pets. Cats, rabbits, ferrets, dogs – golden retrievers will accept any animal, regardless of the species, the difference in size, or age.

Many people are surprised when they see a cat and a dog getting along, but it’s typical with golden retrievers because they are so friendly. A golden will never behave aggressively towards another animal first.

However, remember that friendship goes both ways, and a golden retriever may be forced to protect itself if another animal attacks. In other words, success also depends on the other pet’s temperament.

Still, the chances are that a golden retriever will simply avoid interaction with an unfriendly cat or dog than engage in a fight. Furthermore, these dogs are easily trainable and intelligent, so they always obey the owner’s commands.

As long as both pets are getting equal attention, the owners can be sure that their household will be in perfect harmony. Goldens have enough love to share with everyone.

Golden retrievers remain puppies at heart even at adult age. They have a lot of energy, so they love romping around, swimming, and playing fetch. They will happily spend the entire day outdoors and make perfect dogs for children.

Female golden retrievers tend to be more mature than males, but even they behave goofy at times, doing odd things that inevitably cause laughter. It’s perfectly normal for senior goldens to behave like youngsters.

Golden retrievers can sometimes be so excited that they would run around in circles or try to catch their tail. These dogs require at least an hour of exercise a day, or they will become unbearable.

For this reason, golden retrievers aren’t the best breed for older people. One would expect that a senior dog would make a perfect companion for retirees, but goldens never lose their playfulness and enthusiasm.

Fun fact – golden retrievers are so crazy for balls that a golden Augie from Texas won the Guinness World Record for simultaneously holding five tennis balls in her mouth in 2005.

Golden retrievers are ranked fourth on the most intelligent dog breed list, following poodles, German shepherds, and border collies. These dogs were initially used for hunting, and hunting dogs had to be smart to perform the owner’s commands.

Dog intelligence is a multi-faceted concept. It refers to a dog’s ability to memorize commands, perform complex tasks, read human body language, and express its feelings and needs. Golden retrievers excel in every point.

They understand each individual’s boundaries and when goofiness is or isn’t acceptable. However, remember that a dog’s behavior also largely depends on the owner’s training and socializing efforts.

Golden retrievers may seem like cuddly, friendly angels, but only until something threatens them, their puppies, or their favorite people. Like any hunting dog, goldens were bound to be fearless and confident.

Golden retriever owners report that their puppies can take away toys from much larger dogs without batting an eye or run into a lake at full speed even if they’ve never swam before.

Some people say that a golden retriever is more likely to lick an intruder to death than attack it, so they make poor guard dogs. That’s partially true because golden retrievers are very social and want to be friends with everyone.

If the intruder knows how to behave with dogs, they may pet the golden and go rob the house. But if they harm the golden’s owner, beware! These dogs are very loyal to their owner and will risk their lives to save their favorite human.

Golden retrievers top the list of the most affectionate dog breeds. Since they are gentle, loving, and always remain puppies at heart, they absolutely love to cuddle. They will lick the owner’s hands, look in the eyes, and try to get on the lap.

Some golden retrievers are so affectionate that they will try to follow the owner to the toilet and sleep in the bed.

Of course, keeping a 75-pound dog on your lap or sleeping under the blanket with a golden that was rolling in mud earlier on doesn’t appeal to everyone.

It isn’t a breed for people who prefer dogs to stay on the floor and certainly not for those who want an outdoor guard dog.

Golden retrievers need love and affection like oxygen, and if the owner neglects their emotional needs, they may develop anxiety. Due to such gentleness and affection, goldens make excellent therapy dogs.

They can sense human emotions because of their fine-tuned intuition and will happily cuddle with a sad person for hours.

Golden retrievers are both intelligent and eager to please, which makes them highly trainable. A golden retriever will never do something the owner explicitly prohibits if it was properly trained.

Golden retrievers aren’t nearly as stubborn as Akita, Shiba Inu, Jack Russel terriers, or English bulldogs. They certainly aren’t the most stubborn dog breed, but they can be very persistent if the owner doesn’t start training early.

Golden retrievers will go over and beyond for their owners. They are recognized as the most loyal dog breed by the American Kennel Club. Such devotion is both a benefit and a drawback.

On the one hand, a golden retriever will obey any owner’s command and do anything to protect its loved ones. Their love capacity is infinite. Who wouldn’t like their dog to love them so much?

On the other hand, golden retrievers demand the same level of devotion in response. They genuinely suffer when their owner isn’t around and can be severely traumatized if their owner leaves them or passes away.

Golden retrievers are the most curious dogs. They love to explore new destinations and make perfect dogs for road trips. Golden retrievers can’t stand routine and can become bored if they always walk the same route.

A golden retriever won’t pass a dinner plate without sniffing it, will excitedly run towards the door when guests come, and can fearlessly get its nose into a wasp nest if it has never experienced a sting before.

Perhaps, such curiosity can be explained by the playfulness, intelligence, and golden retrievers’ powerful sense of smell they inherited from their ancestors, bloodhounds.

Golden retrievers are the friendliest dogs, always happy and outgoing. They are born extraverts and need the same owners. Don’t expect to walk with a golden retriever quietly without talking to a single person along the way.

A golden retriever will never ignore guests, sleeping in its dog bed as a Basset hound, German shepherd, or pug would.

These dogs will run towards strangers like they’ve known them for ages and try to play with every dog they meet, big or small. Even their facial expression is always friendly and smiley as if they greet everyone.