Things To Know Before Getting Two Golden Retrievers 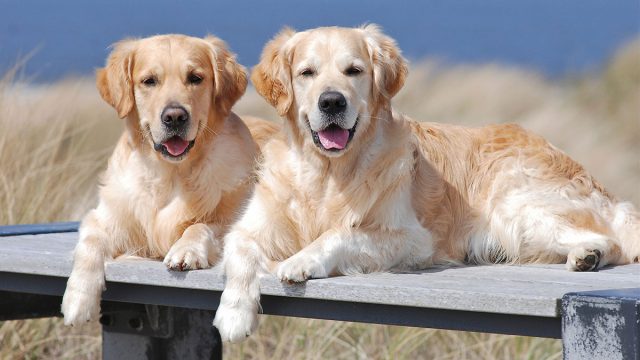 Golden retrievers are beautiful dogs with gorgeous, lustrous coats and a lovely temperament.

However, getting a second dog has numerous caveats and pitfalls. Two dogs aren’t solely doubled fun and affection but also doubled responsibility.

If you’re considering getting a second golden retriever, ensure that you have the extra money, time, and love to ensure both pets’ physical and mental well-being.

However, the pros of having two golden retrievers outweigh the cons, provided that both dogs get proper training.

Golden retrievers are lively, energetic dogs that require a lot of activity to prevent behavioral issues and health condition development.

A golden retriever that doesn’t get proper training and sufficient exercise can turn into a destruction machine, causing mischief in the house.

Furthermore, goldens preserve their puppy goofiness at an adult age. It may not manifest when a golden retriever is alone at home, but if it has a friend, it will happily run around with its new companion.

On the one hand, that’s a pro. Two golden retrievers can wear out each other’s energy, making the owner’s life easier – but only if they can spend a lot of time outdoors. Two goldens in an apartment is a nightmare.

On the other hand, keeping up with one golden retriever’s activity levels is already challenging enough, and to own two, you need to be either an athlete or have a kid who’s ready to play with them day-long.

Golden retrievers are some of the most affectionate dogs and need a lot of attention for their mental well-being. If you struggle to meet the affection needs of one golden, getting a second one may not be wise.

Golden retrievers love to cuddle, lick the owner’s hands, look straight into their favorite human’s eyes, and sleep on the couch. Golden retrievers that aren’t getting enough affection genuinely suffer and may even develop anxiety.

The amount of love golden retrievers give is uplifting and can be of great help in harsh times, but it can also get annoying when you’re tired.

However, two golden retrievers may be excellent for large families – this way, everyone gets their portion of cuddles.

Two dogs mean double the chores. Perhaps, you’re already used to finding your golden retriever’s fur all around the house, including in the kitchen drawers, in your fridge, and on your clothes.

Furthermore, the more dander your dogs shed, the higher the risk of allergic reaction. Some people only have a mild allergy not triggered by one dog, but when they are in an environment with several dogs, they start coughing and sneezing.

Perhaps, the most significant point to consider when thinking about getting a second dog is increased expenses.

We aren’t referring solely to the initial cost of the dog but also to recurring expenses such as veterinary care, food, toys, and grooming.

When you get a new puppy, you need to buy a crate, leash, collar, food and water bowls, toys, and other miscellaneous items that cost several hundred dollars.

You can save on some items since you already have a dog, but note that some goldens may get jealous if you give their toys or bowls to another pup.

Food for a single golden retriever costs $240-$360 a year, depending on the brand and extra treats. So, for two dogs, you’ll need to spend over $500 annually.

Then, account for veterinary expenses. Even if your dogs are generally healthy, you will need to visit a vet for regular health check-ups and vaccinations, which costs $500-$1,000 a year.

Furthermore, puppies, like kids, get sick more often than adult dogs, so you may have to waste quite a hefty sum at the veterinary clinic the first year.

Don’t forget to consider the costs of golden retriever training. You may train your dog yourself, but unless you are experienced in canine training, you are likely to encounter behavioral problems when introducing a new pet to your old dog.

The overall estimated costs of owning a golden retriever in the first year exceed $2,100. Each recurring year will cost you an additional $1,740-$2,800 or more if the dog needs veterinary treatment or special training.

A Solution To Separation Anxiety

Getting a second dog is arguably the best treatment for golden retriever separation anxiety. Dogs are pack animals that stress when left alone, and golden retrievers are the most affectionate, sociable dogs of all.

If your dog is crying for hours when you aren’t home, chewing furniture, drooling, has potty accidents, or attempts to escape, it may have separation anxiety.

Sometimes, distinguishing between over-attachment and normal behavior can be tricky.

It’s normal for dogs to follow their owner around the home, but if your golden becomes distressed whenever you aren’t in the same space, you may need to start worrying.

Getting your golden retriever a companion may resolve the issue. Two dogs can entertain each other while the owner isn’t home, preventing the feeling of loneliness.

However, it may have the opposite effect if you pay more attention to the new puppy.

The best time to get a second dog, according to canine behavioral specialists, is when the first dog is at least one year old. Dogs need up to six months to adjust to the new home and bond with the owners.

While your first dog is adjusting, it doesn’t need the stress of getting accustomed to a new pet in the house. Introducing a new pet too early can lead to behavioral problems in both dogs.

Training two young dogs at the same time is a challenge even for experienced breeders, so ensure that your older dog’s personality and habits are fully formed before getting a second pup.

Getting a golden retriever puppy when your first dog is already old may not be the best idea either. Your first dog may not be able to handle a puppy’s energy levels or think that you’ve got a replacement because it’s old.

If your golden retriever is old, but you want a second dog, consider a breed with lower energy levels to ensure your dogs can play together.

Each dog’s personality is different. You may have the funds to own two dogs, a large enough house, and the time to invest in grooming and training.

But if your golden retriever doesn’t get along with other animals, you may have to stick with one pet. Most goldens are sociable dogs that tolerate other dogs, cats, rabbits, and pretty much any other pet, but there are exceptions.

If you aren’t sure how your dog would perceive another pet in the house, socialize it at your local dog park or daycare.

The answer largely depends on a particular dog’s personality, training, age, and other factors, but most canine behavioral specialists recommend getting a dog of the opposite sex, assuming both dogs are fixed.

You can own two male dogs, but the risk of them fighting to determine who is the alpha is high. The same applies to two female dogs – they are likely to have conflicts, so you should be firm in establishing the hierarchy.

How to Avoid Jealousy & Aggression

Learn how to introduce a second dog into the family correctly to avoid jealousy and aggression from the first dog. Start by picking a neutral ground for introduction because your first dog may get territorial.

A public park or a friend’s house is a better option than your living room. Encourage the dogs to sniff each other and play together, but be aware of any aggression signs.

Remove your older dog’s possessions when introducing your dogs, and try to teach the younger dog to only play with its toys and eat from its bowl.

Keep your dogs separated whenever you aren’t around, and give your pets equal attention at all times.

The behavioral issues may range from aggression to anxiety and fear. Littermate syndrome occurs because puppies develop such a strong attachment to each other that they can’t interact in a usual manner with people and other dogs.