Why Are Golden Retrievers So Nice? 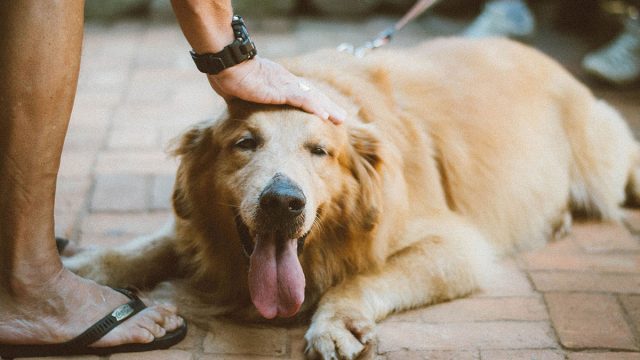 We bet you’ve never met a golden retriever that’s aggressive, shy, or scared for no reason.

These dogs are always up for a game, confidently let strangers pet them, and love everyone, including kids and other pets.

Golden retrievers are so friendly because of their inherited intelligence, obedience, devotion, and confidence.

However, genetics isn’t the only factor affecting a dog’s temperament, and golden retrievers also owe their outgoing, lovely personality to the effort of breeders and owners.

Understanding why a dog can be aggressive can help us understand why golden retrievers are so friendly. Aggression in dogs has different reasons, the most common being fear and defensiveness.

Think of chihuahuas – they are the barkiest dogs and are often aggressive towards people. It’s easy to see why beagles or fox terriers bark a lot -they were bred as hunting dogs and have a high prey drive. But chihuahuas?

The reason is simple – being the smallest dog breed, chihuahuas are scared of everyone and strive to appear fearsome. That’s not to say that chihuahuas can’t be friendly, but they need proper behavioral training and socialization.

Golden retrievers are the opposite. They have inherited confidence and fearlessness from their ancestors. These golden retriever personality traits are deeply rooted in their genes, making goldens friendly towards everyone.

They will never attack another animal first or bark at a stranger because they don’t see sense in faking fearsomeness. Golden retrievers know that they can defend themselves and their favorite people if someone attacks.

They don’t fear the attack and don’t need to prevent it by trying to appear dominant – they are large and strong enough.

The American Kennel Club ranks golden retrievers as one of the most intelligent dog breeds. Canine intelligence is a bit different from human intelligence, though, so many people fail to understand what makes a dog smart.

In other words, canine intelligence is based on comprehension, memory, and empathy, and the latter explains why golden retrievers are so loving and friendly. These dogs can effectively detect human emotions using their fine-tuned intuition.

Not only do golden retrievers understand when you are sad, but they also try to make their favorite human feel better by cuddling, licking their fingers, and looking right in the eyes with a happy smile. They are perfect therapy dogs.

Some people are more empathetic than others and appear friendlier because they genuinely care about someone else’s feelings. In a way, dogs are similar – some of them are better at understanding and dealing with human emotions.

Due to the connection between canine empathy and intelligence, the same breeds top the list of the least friendly and least intelligent dogs – Basenji, Afghan hounds, and Shiba Inu. However, their owners would likely disagree with both.

Golden retrievers are commonly ranked the most loyal dog breed. But unlike intelligence, devotion can’t be as easily evaluated. It’s an intangible, unmeasurable concept that can only be felt and experienced.

Generally, all dogs are devoted to their owners. Researchers often attribute dog loyalty to our long shared history.

However, this explanation doesn’t make much sense with goldens because they were only bred in the 1800s, and some older breeds are less devoted.

A more plausible explanation of golden retriever loyalty is selective breeding. Like any dog breed developed for a specific purpose, only the most devoted, intelligent golden retriever individuals could produce descendants.

Another possible theory of dog loyalty lies in their neurological responsiveness. Unlike cats or ferrets, dogs are good at detecting human emotions, and we’ve just determined that golden retrievers are the most empathetic dog breed.

Studies have shown that the parts of the golden retriever brain responsible for happiness activate when their owner is in a good mood and vice versa. Golden retrievers have a strong emotional bond with their owners, which is related to loyalty.

Another study has proven that dogs are more responsive to their owner’s smell than the smells of unfamiliar people, meaning that dogs genuinely find their owners special.

Golden retrievers are some of the best trainable dogs because they’re intelligent, eager to please, and highly obedient. In contrast, some dog breeds, including the Afghan hound, bulldog, and foxhound, won’t do anything they don’t want to do.

Of course, a dog’s obedience also depends on the owner’s effort, and we’ve seen some surprisingly obedient English bulldogs and hounds. Still, in golden retrievers, this trait is inherited. They are born perfect working and service dogs.

Golden retrievers always listen to their owners, so if the owner commands “sit,” the dog will sit instead of walking around a stranger, making them feel uncomfortable. This may create a perception that golden retrievers are friendlier than other dogs.

Golden retrievers love their owners unconditionally and endlessly, but their love isn’t reserved for one person. Goldens have enough love for everyone and happily share it.

Since golden retrievers are confident, outgoing dogs, they can express their love even to people they’ve never seen before.

Their motto is – “everyone deserves to be loved unless they’ve proven otherwise.” And proving that you’re a terrible person to a golden isn’t simple.

Some dogs may be genuinely nice and friendly, but they are introverts and shy of people, such as greyhounds and pugs. They may be simply too humble to come up to a stranger, let alone allow a stranger to touch them.

Goldens are a different breed. They are natural-born extroverts that will never miss a chance to communicate with people and get a pat on the back.

They Are Hunting Companions

As the name suggests, golden retrievers were bred to retrieve objects and fowl from the water.

They are water hunting dogs and share the same personality traits with other breeds developed for this purpose, like the Irish water spaniel and Labrador retriever.

All hunting dogs are eager to please the owner. A hunting dog must be cooperative, listen to commands, and be willing to go overboard to catch the prey. They must be great communicators, never hiding their emotions.

Being nice is rooted in golden retrievers’ genetics because these dogs were intended to help people. Many hunting dogs make perfect family dogs because of the personality traits they inherited from their ancestors.

Selective breeding shapes a dog’s personality; that’s no secret. Beagles can’t resist exploring new smells, and golden retrievers can play fetch all day long because they were bred to do it.

Natural intelligence, obedience, and loyalty made golden retrievers popular as family dogs, which, in turn, forced breeders to develop the typical family dog traits in this breed even further.

Attention Given To The Puppy

Socialization is key to a dog’s friendly temperament. Sure, most golden retriever personality traits are inherited, but a puppy that isn’t getting enough attention may grow up shy or aggressive despite its genes.

Just because golden retrievers are predisposed to being nice doesn’t mean that the breeders can neglect puppy socialization. It ensures that a dog won’t be afraid of new sounds, environments, and people.

A dog that grew up in love, surrounded by people and other dogs, will be friendlier than one that has never encountered strangers and other animals.

Under-socialized dogs may feel comfortable in their home environment but be extremely stressed from vet trips or walks in the local park.

And since temperament is the primary reason golden retrievers are so sought-after, breeders invest extra effort in socializing their puppies.

Are All Golden Retrievers So Nice?

A dog’s temperament depends on many factors, including the breed, bloodline, upbringing, training, and owner’s attitude.

With so many variables, two dogs can’t be the same, which leads us to a logical question – are all golden retrievers nice, or are there exceptions?

Of course, not every golden retriever is equally friendly and loving. A golden that hasn’t been abused is unlikely to be aggressive.

Still, some goldens are just born introverted, snobby, stubborn, or lazy, and others develop these traits due to a lack of socialization.

Remember that each dog’s personality is unique, and you shouldn’t expect every golden retriever to be like the internet describes them. That’s why meeting a puppy and getting to know its temperament before buying it is so important.