12 Reasons Why Golden Retrievers Are The Worst Dogs 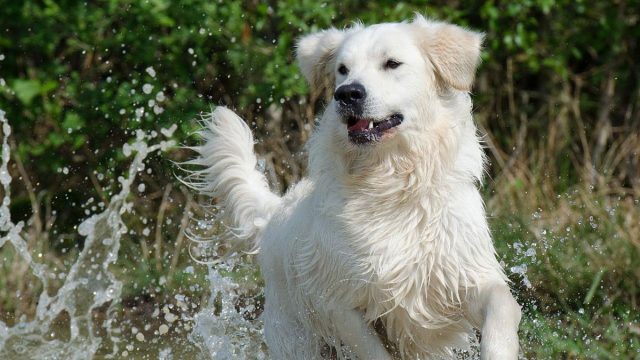 Every owner loves their dog, but golden owners will give you endless reasons why golden retrievers are the worst dogs.

Golden retrievers are active, affectionate, devoted, and playful. They have gorgeous shiny fur and a friendly smile.

Unfortunately, all these points can be seen both as advantages and drawbacks of the breed. Some people can’t help but fall in love with golden retrievers; others genuinely hate them for the same traits.

Prospective owners should know golden retriever pros and cons and evaluate how well these dogs fit their lifestyle.

At the end of the day, the primary risk of getting a golden retriever is that you will likely want another one. They may not be perfect, but they are absolutely adorable and steal your heart.

1. They Are Active – Too Active

Golden retrievers are highly energetic dogs, perhaps, way too energetic for many people. Their activity benefits people who love to be outdoors, jog in the mornings, and explore new terrains.

However, it can become a problem if the owner can’t provide the dog with sufficient exercise.

A golden retriever that can’t drain its energy outdoors will chew furniture, run wildly around the house, and dig flowers in the garden.

For this reason, golden retrievers are among the worst dogs for retirees, despite their friendliness and affection. On the other hand, a golden may be perfect for a family with kids who will play with it all day long.

However, a golden retriever’s excessive energy may be dangerous because a dog can knock over a small child, so they shouldn’t be left without supervision.

2. They Have a Short Life

Losing a loved one is painful, and every owner wants their dog to live as long as possible. Unfortunately, golden retrievers have a relatively short lifespan of 10-12 years on average.

Golden retriever’s lifespan is slightly longer than the average 8-10 years of English bulldogs but significantly shorter than most dog breeds that can live up to 20 years.

With proper care, golden retrievers can live 13-14 years, but the owner’s effort often isn’t sufficient to prolong their pet’s lifespan.

Interestingly, researchers have found that golden retriever life expectancy has decreased by 5-6 years only in the last five decades.

Perhaps, the issue is caused by genetic defects found in certain breed lines. Some breeders have become reckless, breeding dogs with health issues striving to meet the demand.

Furthermore, most golden retrievers have cancer at some point in their lifetime, and if the owners don’t notice it early, lethality odds are high.

3. They Are Too Stubborn

Golden retrievers are known as obedient dogs that respond well to training, and it’s true. However, these intelligent dogs also have a mind of their own and can be very stubborn.

Many golden retriever owners know the struggle of forcing their pet to go back home when it starts to rain or eat food it doesn’t like.

A golden retriever won’t become aggressive if it doesn’t want to do something, but it won’t move an inch. And since goldens weigh 65 pounds on average, carrying one in your arms isn’t a reasonable solution.

The good news is that golden retrievers are highly food-motivated. They are real gluttons and are ready to budge if the owner offers them a treat.

Friendliness is typically considered an advantage for dogs, but it can be a problem for a guard dog. Female golden retrievers are more protective, but male goldens remain goofy puppies until their senior years.

A golden retriever is unlikely to attack someone who enters its territory without invitation unless the person poses a direct threat to the owner.

Goldens don’t even bark often, so burglars can remain unnoticed if they know how to behave with the dog.

However, if a stranger attacks a golden retriever’s owner, the dog will protect its favorite human risking its life because goldens are very loyal and devoted.

Golden retrievers aren’t the best breed for perfectionists who love to keep their house clean and orderly at all times. Golden retrievers shed, leaving hair on carpets, furniture, and clothes, and there’s no way of stopping shedding.

They also admire the water and will happily get on the sofa after playing in a puddle. Even worse if it was a puddle of mud because goldens don’t mind getting dirty.

While most dogs will just walk around a puddle, goldens will never skip jumping into it and rolling around. They genuinely love mud baths more than pigs.

That’s not to mention that goldens have long hair and can shake the mud off in the house, covering the walls and floor with dirty spots.

So, owners may have to bathe their golden retriever much more often than the recommended once in six weeks.

Golden retrievers have gorgeous, shiny hair, but it comes with a pitfall – they shed a lot. Goldens are in the top ten of the most shedding dogs.

They shed every day, year-round, and the owners can’t do anything to stop a golden from shedding. The shedding becomes unbearable in the fall and spring or when the dog is stressed.

Golden retriever owners find clumps of fur in the most unexpected places, including kitchen drawers, coat pockets, and inside the fridge.

The explanation as to why golden retrievers shed so much lies in their double coat structure. The shiny, long topcoat sheds at a moderate rate, going through the normal lifecycle.

Meanwhile, goldens blow out their thick, dense undercoat that regulates the body temperature twice a year, shedding at a doubled rate. To minimize shedding, owners must regularly brush their dogs.

Many dogs like to chew, but not all dogs love it like golden retrievers. Goldens seem to always carry something in their mouths, be it a tennis ball or a stick found in the woods.

Chewing is perfectly normal for puppies whose teeth are changing and who want to explore the world, but owners expect it to stop when the puppy grows up. Well, it doesn’t happen with goldens.

Chewing is rooted in the golden retriever genetic code since they are hunting dogs. Many goldens also chew things because of separation anxiety and boredom.

The only way to keep chewing at bay is to provide the dog with sufficient attention and exercise, which isn’t simple considering how demanding goldens are to both.

8. They Cannot Be Left Alone

If you’re constantly at work and can’t provide a golden retriever enough attention, consider getting a cat instead. Golden retrievers suffer when the owner isn’t home and can even develop separation anxiety.

Goldens crave human attention and can’t be left alone for long. These dogs will wait for the owner near the bathroom door while they’re taking a shower and sleep on the doormat waiting for them to return from a store.

9. They Are Prone To Some Diseases

Every purebred dog is prone to specific diseases, but some breeds have it worse than others.

Golden retriever health isn’t nearly as bad as that of miniature poodles, basset hounds, and Newfoundlands, but prospective owners should be aware of several conditions.

10. They Are Obsessed With Food

Golden retrievers are food motivated, which can be a pro and a con. On the one hand, they respond well to food rewards, which eases the training. On the other hand, golden retrievers will eat anything they find in unlimited amounts.

The owner should be constantly aware while walking with their golden because it may pick up and eat some questionable stuff. They should also monitor the dog’s daily calorie intake because the breed is prone to obesity.

Golden retrievers are some of the most affectionate dogs. They love to cuddle, lick the owner’s hands, watch TV together on the couch, and sleep in the bed.

Goldens are the best therapy dogs, but not every owner will appreciate such affection.

Combined with a love for playing in the mud, a golden retriever’s affection can become a nightmare. Forget about white jeans and bedlinen.

One can teach a golden not to get on the couch, but it will likely take over the furniture anyway when the owner leaves.

After a long time of unsuccessful training, most golden retriever owners simply give up and learn to deal with their dog’s affection and obsession with furniture.

Golden retrievers can steal not only your heart.

They also steal socks, gloves, wallets, and anything else that fits in their mouth due to their love for chewing.

For a golden, you chasing it to get your sock back is the favorite game.